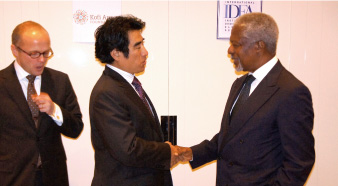 Picture: With Prince Alfred of the Principality of Liechtenstein 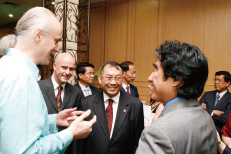 PIcture: Partnering with Bridges ‒ Dialogue Toward a Culture of Peace 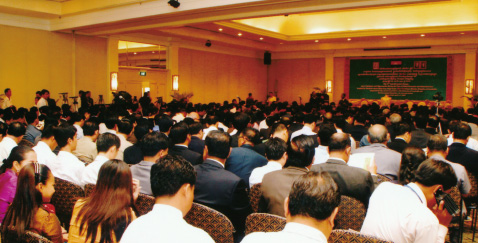 on issues related to Japan and the Middle East（August 3, 2009） 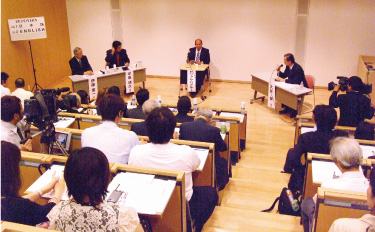 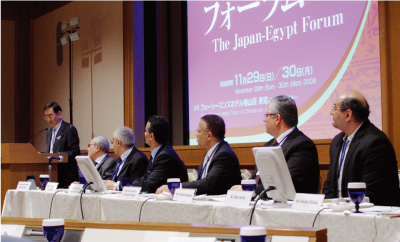 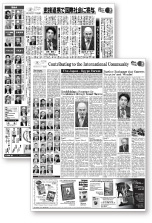 Supporting the Honorary Consulate of the Kingdom of Cambodia 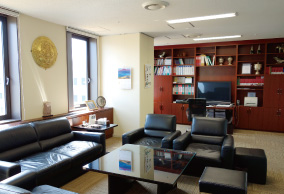 Supporting the Asian Paciﬁc Festival through the Consulate of the Kingdom of Cambodia in Fukuoka, Japan.

Announcing a Golf Tournament and Charity Dinner Show Under the Aegis of the Nelson Mandela Children’s Fund. 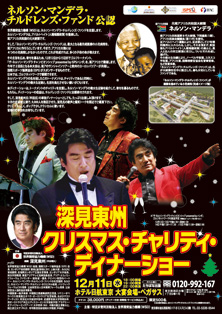 WSD oﬀered support for the Olympic Values Symposium which ran from June 29 to July 19, 2012, in London. Convened by Lord Colin Moynihan, Chair of both the British Olympic Association and of the European Olympic Committees’ successes.

(Co-organized by International Sports Promotion Society and Worldwide Support for Development) Held on July 18th and 19th 2013 at Hotel New Otani in Tokyo.

For two days starting on July 18, 2013, in conjunction with the International Sports Promotion Society, we held the Sports Peace Summit in Tokyo, with support from the Ministry of Education, Culture, Sports, Science and Technology; the government of Tokyo and the Japan Sports Association. Over 50 athletes, leaders in various areas, scholars, and specialists in diverse ﬁelds participated from 16 countries around the world. They examined actual cases and conveyed information from all over the world about how the power of sports brings happiness and joy to human life, makes societies better, and serves as a force contributing to peace. 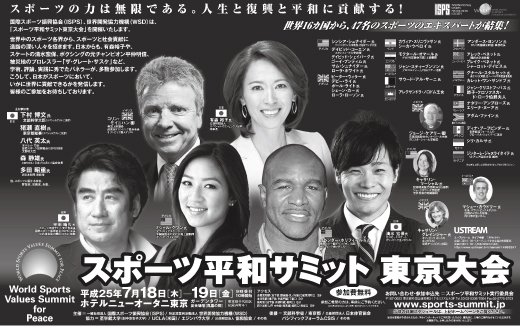 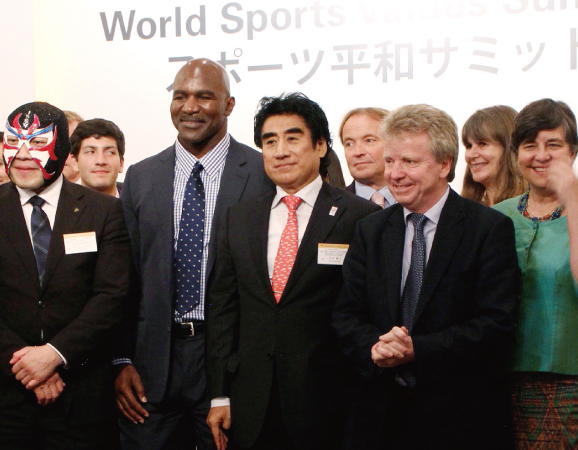 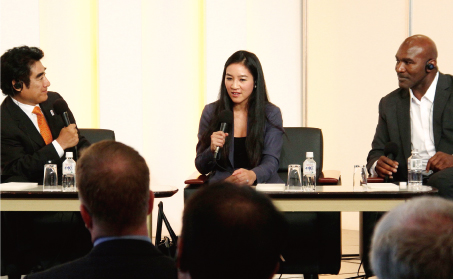 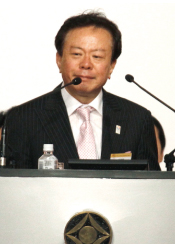 World Sports Values Summit for Peace and Development at the United Nations, New York City. May 22-24, 2014

The World Sports Value Summit for Peace and Development was held at the United Nations headquarters in New York from May 22 to 23, 2014. The summit was jointly sponsored by the United Nations Alliance of Civilizations (UNAOC) and the International Sports Promotion Society (ISPS), Worldwide Support for Development (WSD), and World Faiths Development Dialogue (WFDD).
This was the third summit following the Olympic Values Symposium held in London in June 2012 and the 2013 Tokyo World Sports Values Summit for Peace. Representatives from countries around the world built upon the opinions and results presented at the first two summits and engaged in lively debate on topics such as building peace and coexistence through sports, education, development of societies, and the power of youth and sports. 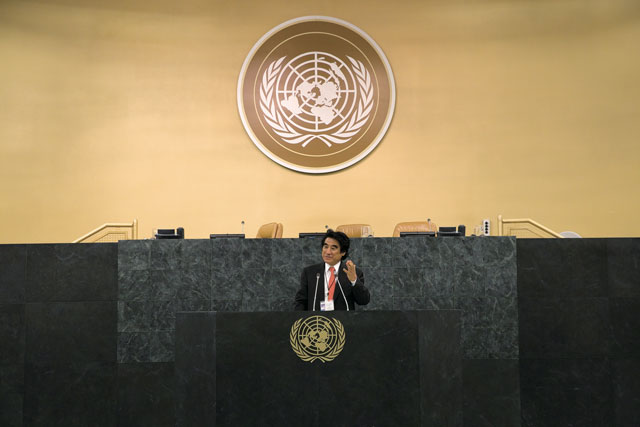 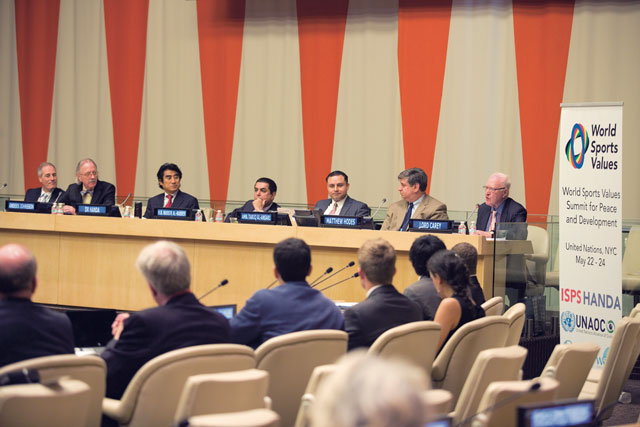 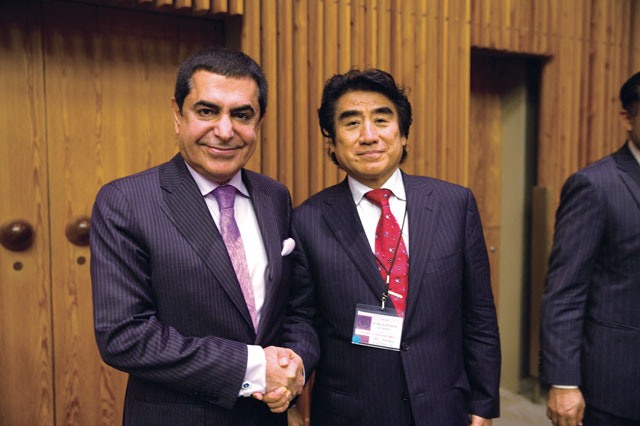 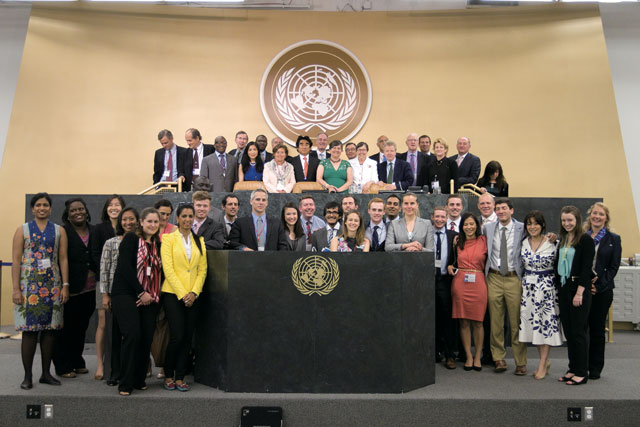 Our organization is supporting the IPU (Inter-Parliamentary Union), which has been engaged in undertakings aimed at constructing and strengthening parliamentary democracy in Asia. We have been implementing programs to advance gender equality and the participation of young people in the political and parliamentary process, to strengthen the governing councils’ functions in the Asian region, and to enable the council to manifest democratic authority.

The IPU is the international organization of Parliaments (Article 1 of the Statutes of the Inter-Parliamentary Union). It was established in 1889.

The Union is the focal point for world-wide parliamentary dialogue and works for peace and co-operation among peoples and for the firm establishment of representative democracy. To that end, it:

● Fosters contacts, co-ordination, and the exchange of experience among parliaments and parliamentarians of all countries;

● Considers questions of international interest and concern and expresses its views on such issues in order to bring about action by parliaments and parliamentarians;

● Contributes to the defence and promotion of human rights - an essential factor of parliamentary democracy and development;

● Contributes to better knowledge of the working of representative institutions and to the strengthening and development of their means of action.

The IPU supports the efforts of and works in close co-operation with the United Nations, whose objectives it shares. The Union also co-operates with regional inter-parliamentary organizations, as well as with international intergovernmental and non-governmental organizations which have the same ideals.

In October 2011, the IPU adopted its Strategy for 2012-2017 under the overall title "Better parliaments, stronger democracy".

The IPU is financed primarily by its members out of public funds. The site of the Union's Headquarters is Geneva (Switzerland).

(Under the auspices of the Ministry of Foreign Aﬀairs and the Tokyo Metropolitan Government）Sep 6, 2013 at Hilton Tokyo. 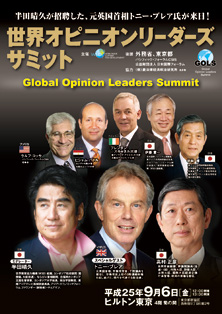 Various opinion leaders from around the world including Rt. Hon.Tony Blair - former Prime Minister of Great Britain & Ireland, Masahiko Komura - member of the House of Representatives and Vice-President of Japan’ s ruling Liberal Democratic Party (LDP), amongst others gathered at the Summit. With Haruhisa Handa serving as the moderator, views on ways to contribute to world peace were exchanged enthusiastically during the three hours.

(Under the auspices of the Ministry of Foreign Affairs, the Tokyo Metropolitan Government, Pacific Forum CSIS and Kyowa Foundation）Sep 6, 2013 at Hilton Tokyo

In addition to former United States President Bill Clinton and former U.S. Secretary of State Colin Powell, as special guests, world-class opinion leaders such as Member of Parliament and former Minister of Defense Yuriko Koike gathered at this summit. With WSD Chairman Haruhisa Handa serving as the moderator, earnest discussions aimed at contributing to world peace carried on for five and a half hours.

Part 1  US- Japan Relationship and Security in Asia-Pacific. WSD Chairman Handa read a keynote speech prepared by Mr. Machimura, [PM1] who was unable to appear.  The speech was followed by a panel discussion.

Part 2  The Qualities Necessary for the Next Generation of Japanese Leaders for a Prosperous US-Japan Relationship. Colin Powell gave a keynote address, followed by panel discussion. 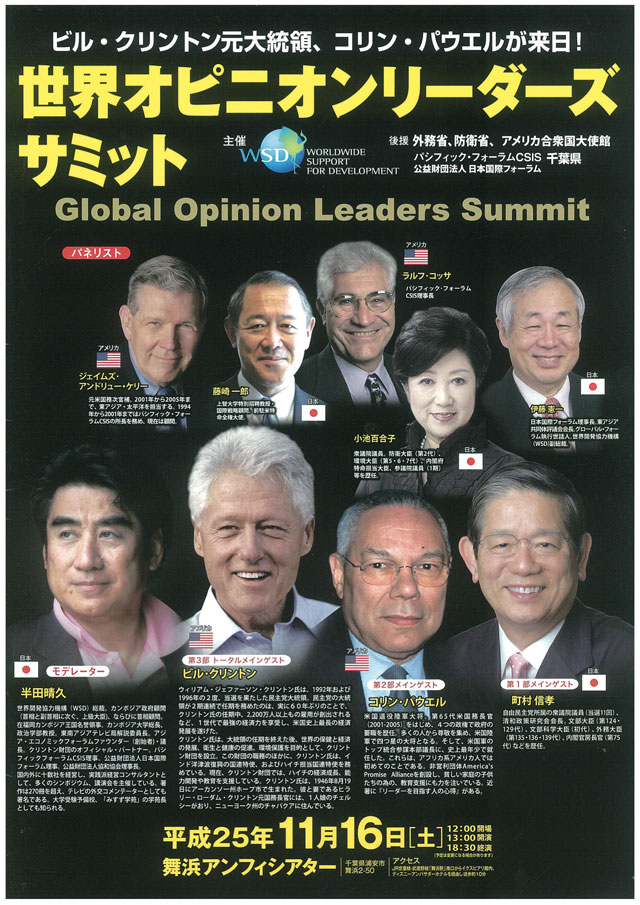 (Under the auspices of Ministry of Foreign Affairs, Ministry of Defense, Tokyo Metropolitan Government, Embassy of the United States of America, The Japan Forum on International Relations Inc., Pacific Forum CSIS ) Held at November 16 at Tokyo Prince Hotel 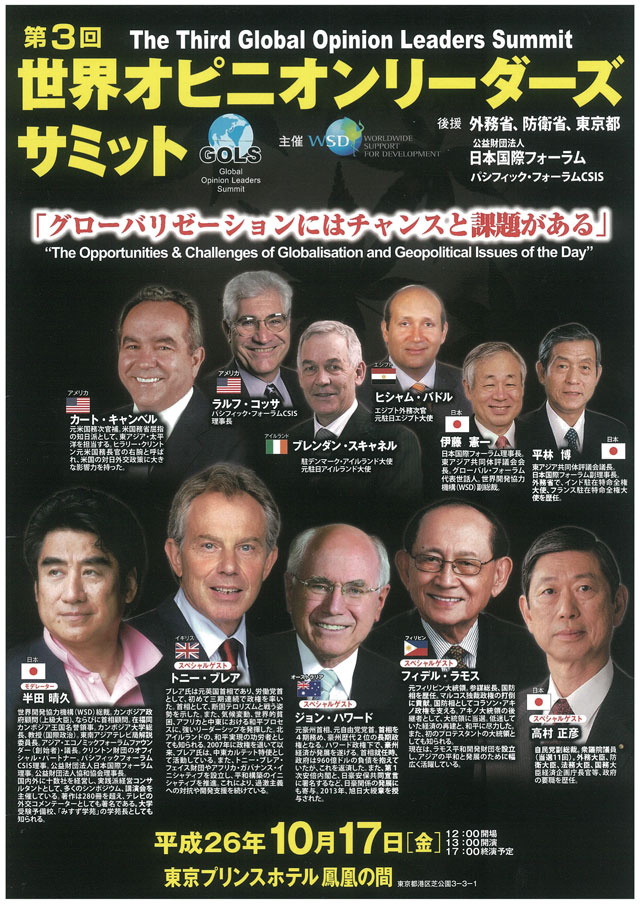 (Under the auspices of Ministry of Foreign Aﬀairs, Ministry of Defense, Embassy of the United States of America, Chiba Prefectural Government, Paciﬁc Forum CSIS,
The Japan Forum on International Relations Inc.）Held at November 16 at Maihama Amphitheatre.

In addition to former United States President Bill Clinton and former U.S. Secretary of State Colin Powell as special guests, world-class opinion leaders such as Member of Parliament and former Minister of Defense Yuriko Koike gathered at this summit. With WSD Chairman Haruhisa Handa serving as the moderator, fervent discussions, aimed at contributing to world peace, were carried out for ﬁve and a half hours.

Greetings from Dr. Haruhisa Handa, Chairman of WSD for “The Second Annual March in March to End Violence Against Women”

I am delighted that Worldwide Support for Development (WSD) is supporting the UN Women for Peace’s March on March to raise awareness to end violence against women throughout the world.
WSD is a not-for-proﬁt organization committed to assisting disadvantaged people and communities throughout the world. I have initiated humanitarian and cultural endeavors in such places as China, Cambodia, and Japan (among others) and have worked alongside my colleagues for this organization, whose values and goals very much match my own. The aim of WSD is to help create a world where people, no matter where they live, can be safe and happy and enjoy economically, socially, and culturally high standards of living.

WSD works to facilitate international cooperation and support in social welfare and education, as well as academia, and to assist people who experience social and ﬁnancial need. In so doing, the organization has supported many endeavors, not all of which can be recounted here. A few include the construction of the Handa Nursing School and the Handa Mother and Newborn Hospital in Laos, the collaboration with the Koﬁ Annan Foundation and the Institute for Democracy Electoral Assistance, the supporting of the Clinton Foundation works, and most recently, the opening of the WSD Handa Center for Human Rights and International Justice at Stanford University. And now we turn to supporting the end to violence against women through the March on March.
I am very happy that WSD is connecting with the UN Women for Peace in order to combat such a worldwide pandemic. Through the reduction of domestic violence, gender equality increases, which results in more peaceful societies. This in turn supports WSD’s initiative to promote peace and human development. It is campaigns such as this that aid in raising awareness to create the change to make the world a better place.  We are proud and honored that WSD can do its part.